Software not Working or Agents Lying?

I did not get any messages. No one sent me any emails. I did not hear any audio alerts. Nothing ever pops-up on my screen. Numbers never change color on my screen.  Are these the replies you are getting from your agents? If so before you contact your IT department or software provider double check things with your agents.

Call centers around the world are having this same “problem”.  The software that alerts the agents about calls, email, chats, open tickets, etc. is being blamed for poor performance levels.  This reporting / alerting software is used to notify and alert agents, supervisors and managers of the current contact center status.

Threshold levels are set to alert and notify the call center of the current status or performance below the goals.  These KPI goals are critical to the success of the business.  By answering calls, emails and chats prior to the threshold level the business will continue to generate revenue or meet customer expectations.  By not hitting these goals the business will suffer a drop in revenue or an increase in production costs.

From the agent point of view the desktop wallboard could be popping up in such a place as to block critical information which affects their performance.  Or the audio alerts that are made loud enough that anyone can hear it also hurts their ears.  It could be there are real reasons why the agents are not responding to desktop alerts.  However, it could be that the agents are lying to you.

These are two examples of actual agent statements.

Example One:
A Telecom IT Manager contacted their provider of desktop wallboards because they wanted to upgrade the software to the latest version and “hopefully it will work like we want it to”.  This statement was a surprise and disappointment to the provider.  So the planned call was changed to a webinar to be able to go through their existing software and discuss the features.

At that time the software provider mentioned to the customer that all of those features existed within the software.  Then the provider demonstrated to the IT manager these features.  Quickly the webinar ended so he could get into a meeting with the call center manager.

The agents were lying because of the dual pressure they were under; meeting KPI goals but keeping customers extremely pleased with the business.  So the agents in order to meet their customer satisfaction numbers lied about seeing and hearing the threshold alerts.  The manager held a meeting to go over the threshold and customer expectations and hold to end the calls quickly once the customer issue is resolved.

The positive about this change is the contact volumes are managed to the best of the call centers ability. But there are multiple negatives including agents not being notified that they are being moved from one group to another group and the supervisor having to take the brunt of the anger from the agents when they are moved to a new group.

The lies that began were the agents stating that they were not getting any messages about the skill group changes that were made and the supervisors lying about when the messages were sent. 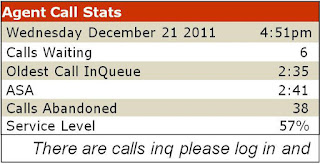 At Spectrum the Support Manager has stated that the department receives trouble shooting tickets from customers that state they are having trouble with the agents desktop wallboard.  After reviewing the problem with the customer IT department the Spectrum support department will review the software, software logs and communicate directly with the call center managers.  At that time the Spectrum support department will request a log into the agents desktop so they can review the “problem” the agent is having.  More than 90% of the time the agent says the problem has gone away and Spectrum no longer receives trouble tickets for this ghost problem.

Software problems do occur and will happen at the least expected time.  Telecom IT departments do a great job investigating problems and doing what they can to get software functioning properly again. When needed they log tickets with the software providers who then begin the resolution process.  From Spectrum’s experience and recommendation if the agents are suggesting a problem that sounds unusual it is best to internally investigate that problem prior to logging tickets with the software provider.

In defense of the agent their workloads can and do fluctuate and a change of internal processes can increase the stress on the agents.  When these things happen the convenience of software problem will help diminish the stress.

Spectrum is a leading provider of Unified Contact Center Reporting.  Contact Spectrum today to discuss your desktop wallboards.  For more examples of reporting visit our website and the products page. http://www.specorp.com/products